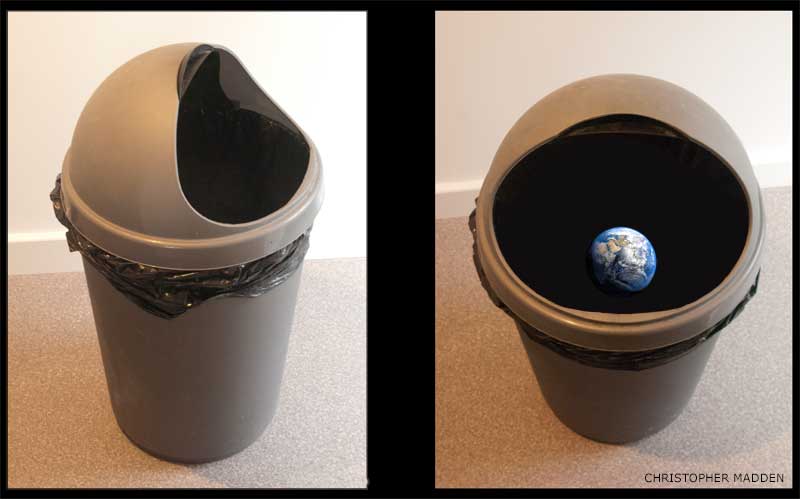 A work of environmental art in the form of a representation of the Earth in a kitchen waste bin.

From most angles (as in the image on the left, above) the bin looks like any conventional kitchen bin: however when viewed from the front (the image on the right, above) the inside of the bin gives the impression of being a dark void (due to the darkness of the bin liner). Visible in the void is a glowing representation of the earth, created as a back-lit image. The Earth seems to be suspended in the vastness of outer space, almost as if the bin was a portal to another dimension.
The work carries the message that the human race is treating the earth with contempt and that we are effectively placing the planet itself in the rubbish bin.
The work is a development of a concept that I had in about the year 2000, when I produced several drawings of the earth falling into a wastepaper basket. The sculptural potential of using a real rubbish bin to create an illusion of outer space is a more recent development.
The emotional impact of seeing the earth floating in the black void of space inside the bin refers to some extent to the iconic photographs of the earth as seen from space as photographed by the astronauts in the Apollo moon missions.

A version of this work was shortlisted for the Royal Academy Summer Exhibition 2022.