When I made this video I assumed that the flies that it features were house flies that had been feasting on a rotting animal carcass concealed somewhere within the walls of the building. The sinisterness of the insects was intended to be a feature of the video.
Since then a bit of research has informed me that the insects were in fact harmless cluster flies (pollenia rudis).
Cluster flies enter buildings on autumn evenings in search of shelter from the worsening weather conditions. Then the following day they sometimes want to get out again, as in the video.
They may enter buildings in small numbers or they may enter in thousands. In the case in the video it was many many hundreds.
The flies live in the countryside, where their larvae feeding on earthworms. They aren’t a health hazard (as far as I know).
Knowing that the flies were harmless and had entered the building seeking shelter rather than being house flies fresh from a rotting corpse in the attic altered my view of them considerably, and I now rather like them, at least on the video. They are an inconvenience though.

I particularly like the way that the flies in the video are moving in an almost choreographed manner. It’s like a little piece of performance art.
The nice calm view out of the window (apart from a bit of wind) is in stark contrast to the dynamic motion of the flies on the window pane. 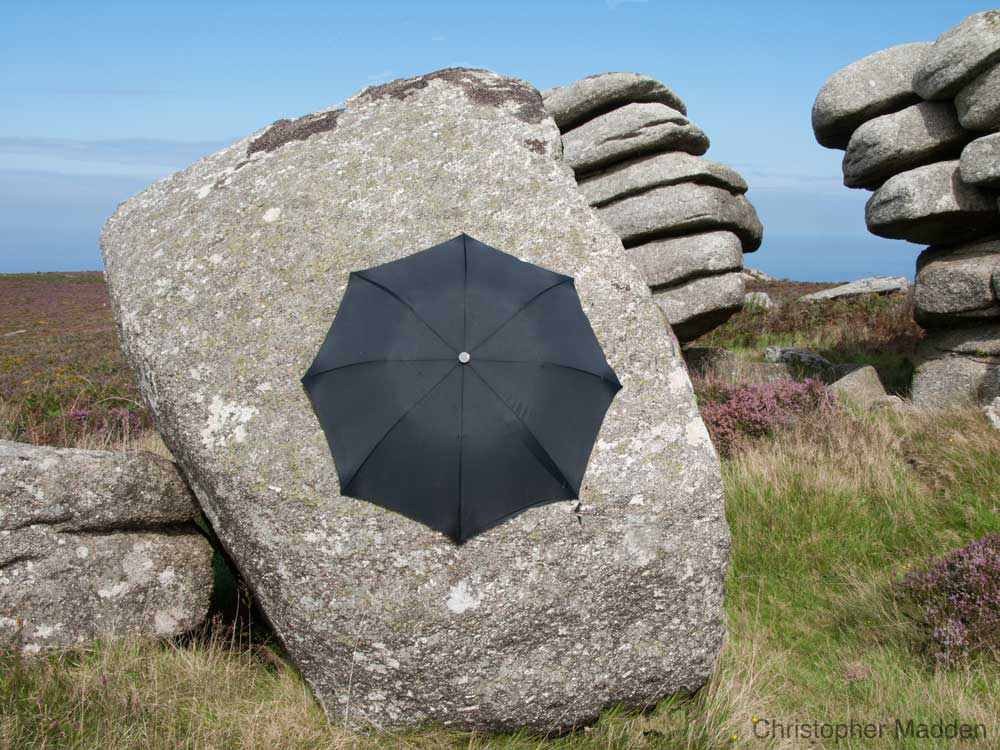 A work consisting of an umbrella clinging limpet-like to a granite rock on a hilltop in Cornwall. 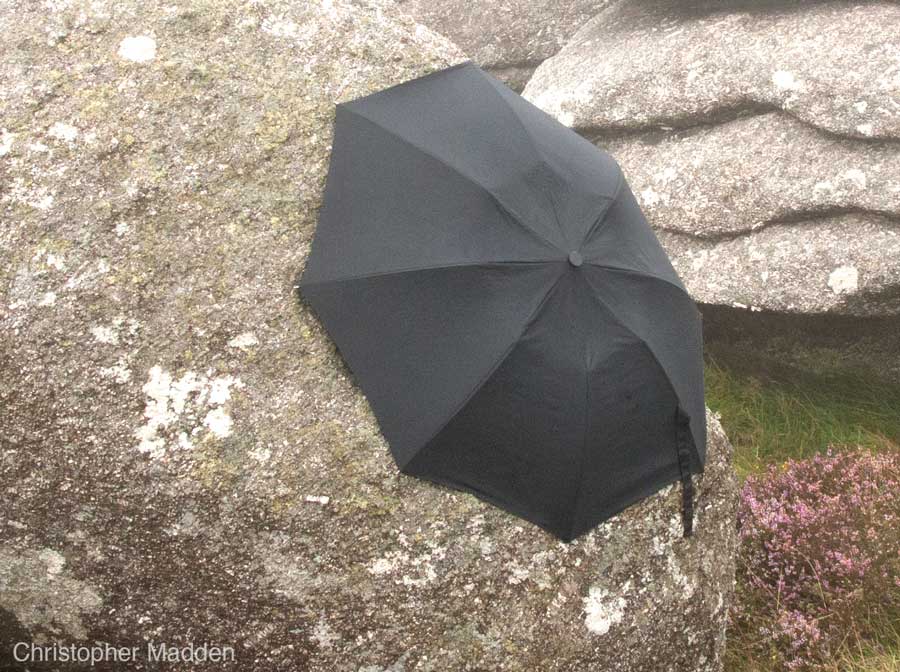 A work consisting of an umbrella clinging to a granite rock on a misty hilltop in Cornwall. 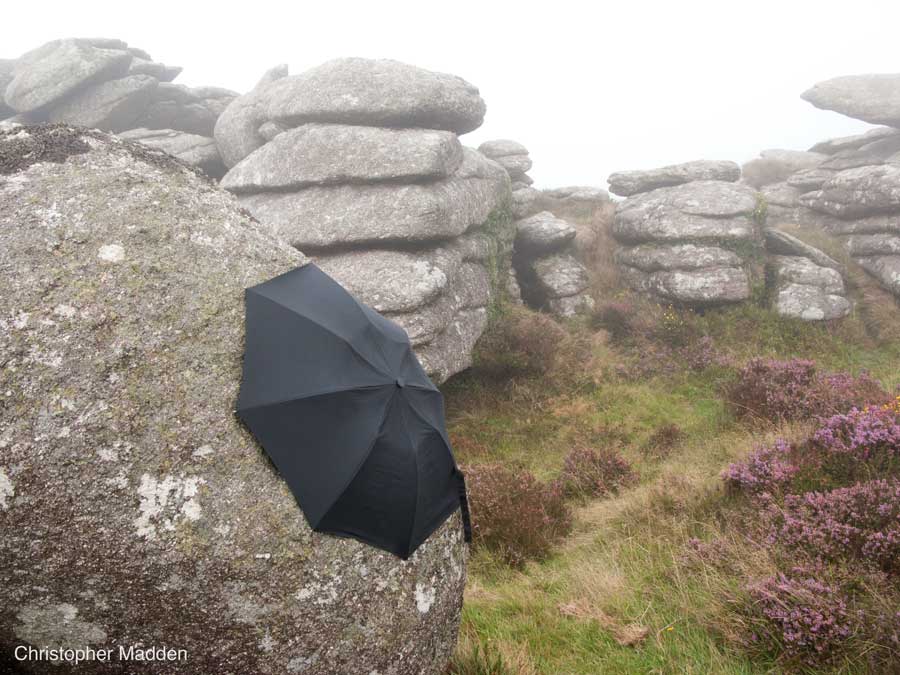 Update, 2021. This work has taken on more relevance since the start of the Covid-19 pandemic, as more people purchase more dogs, which in turn produce more excrement. The fact that some of the new dog owners are quite casual in their ownership responsibilities is reflected in a marked increase of discarded dog poo bags.

A photograph of a natural granite rock formation with a drawing of a fin-like object added to the photograph as though it is attached to the rock.
The rock formation in the photograph is on the Penwith peninsula in west Cornwall, a few miles from St Ives. The large rock on which the fin is  drawn is a rocking stone, known locally as a Logan stone. The stone is said to move slightly when pushed correctly.
The image is a finished artwork, despite the fact that it resembles a concept study for a sculpture in the landscape. The drawing of the fin is deliberately  inconsistent in  terms  of photographic realism with the rest of the image.
Having said that, the development of the concept as a sculpture is a possibility. A photomontage of a concept for a sculpture in the landscape.
The landscape in the photograph is the Penwith peninsula in west Cornwall.
The hammers are meant to project a sense of overbearing force, the fact that there are several of them possibly implying organised force (such as military force). Hammers, to me, have a certain anthropomorphic quality to them, suggesting a degree of human identity – a long thin body with a head at the top. The blank facelessness of the heads of the hammers in this image suggest a mindless power. 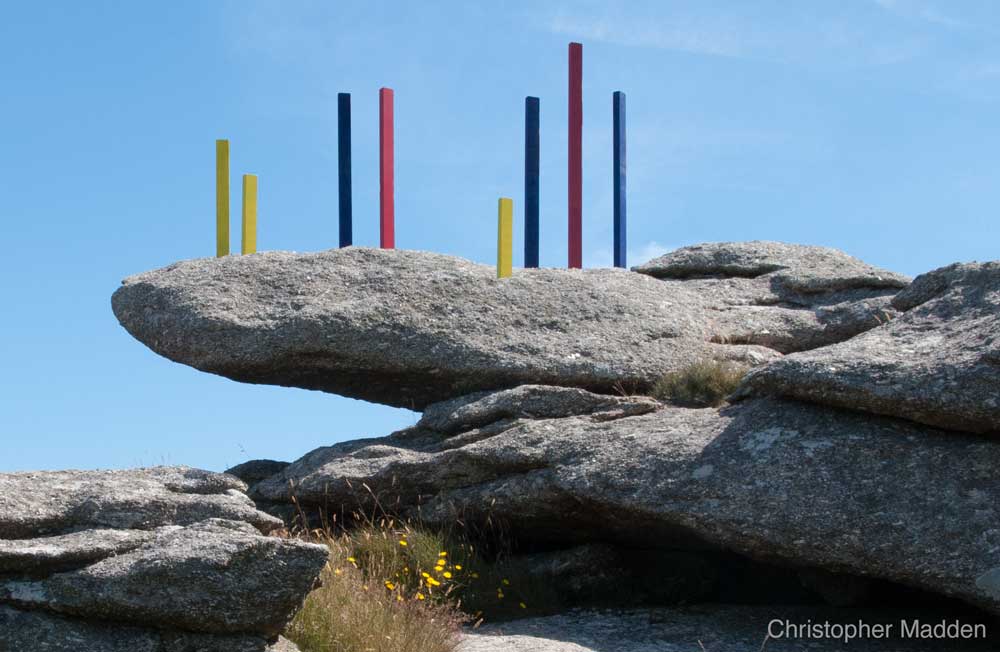 One of my (temporary) sculptural works in the landscape in Cornwall near St Ives. 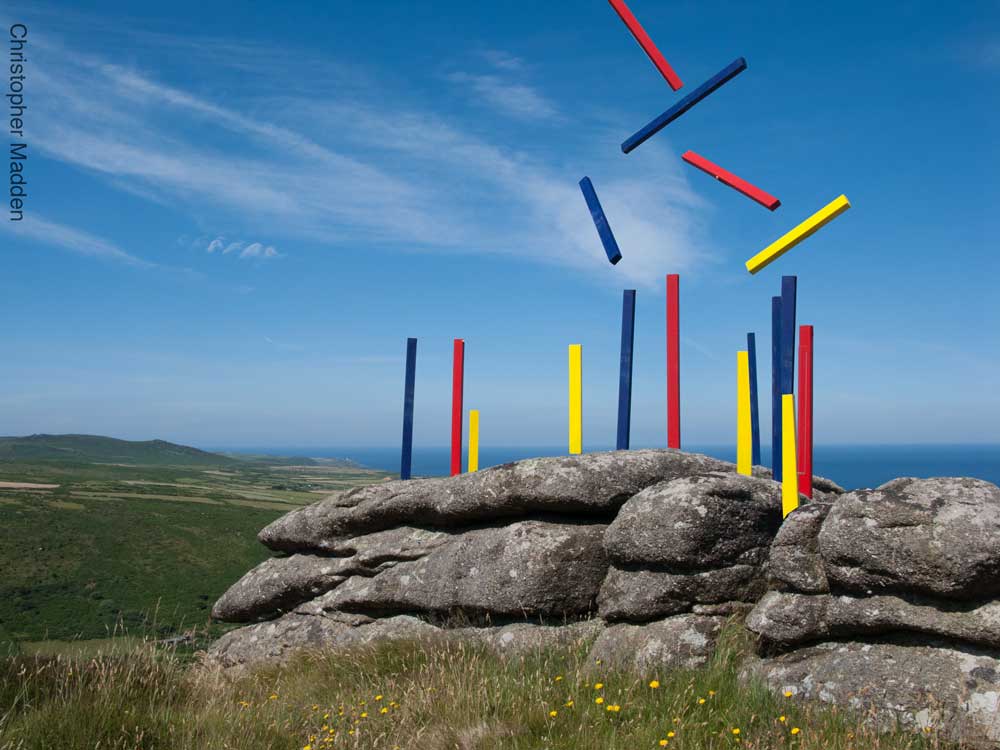 A transient sculpture composed of lengths of painted wood battens (the type of wood commonly used in building construction).
The sculpture was created by positioning a small number of battens in the landscape, photographing them, repositioning them and rephotographing them. Then merging the photographs.
As a result the work has an interesting relationship with time. The sculpture never existed in its entirety as depicted in the photograph, each batten only being in position for long enough to take a photograph. The sculpture only takes on its final form when the twenty-five minutes that it took to position and photograph the battens are compressed into a single instant.

A work of land art, an intervention in the landscape, or art in the environment. The wood battens are about a metre long.

A video of a field of buttercups that contains a hard-to-see object.
The object is revealed at the end of the video.
The video is on a recurring theme in my work – an investigation into perception, reality and illusion.
The video was taken behind my house at Lower Rosemorran, Zennor, in Cornwall.

A gray square floating in a clearing among bushes in the countryside (near St Ives, Cornwall).
The video is of an early study to assess the potential for the concept.
Finished works based on the concept would consist of squares suspended in the environment in positions where members of the public would encounter them, such as along pathways in sculpture parks. The locations of the squares could vary from trackside positions that are below eye level, at eye level and above eye level, where the squares would be seen to move relative to the landscape as the observer walked past. Squares could also be positioned high in the air, sometimes directly above the track, so that they are constantly silhouetted against the sky.

The square in the video, which seems to be floating in the air unaided, is of deliberately uncertain substance or nature. What is certain is that due to its shape, its colour and its position suspended in the air, the square is not a natural part of the environment.
One concept for the work is for the squares to be coloured with a non-reflective black (see image below) so that the floating squares could almost be mistaken for black portals out of the universe and into a featureless void. 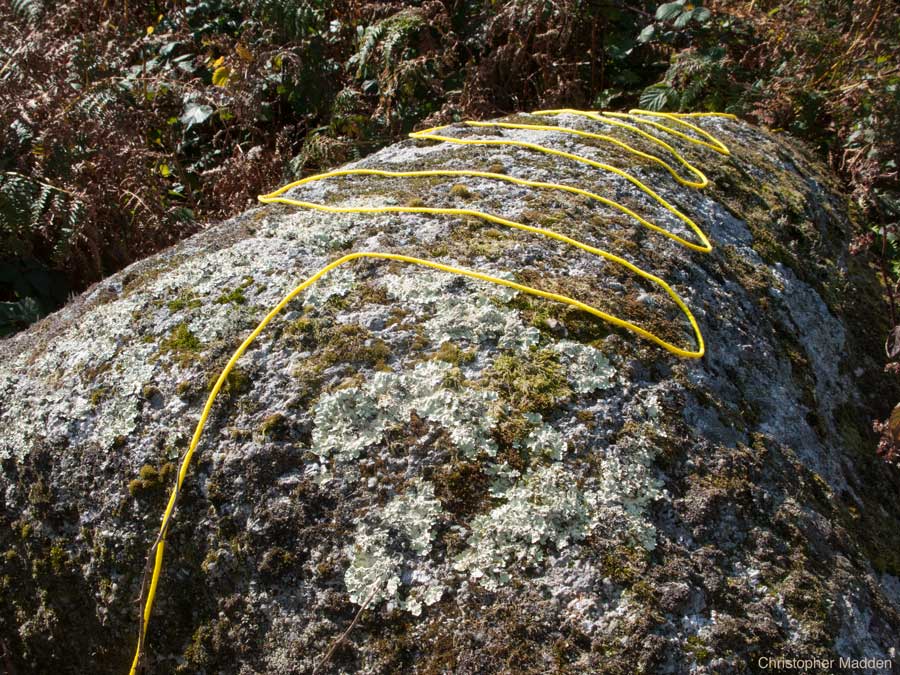 The simplicity of construction of this piece is important. The observer will hopefully notice the almost total lack of endeavour required to create the work, while also noticing the (hopefully) relatively high aesthetic payoff as a result of that endeavour.

A lot of land art and other art in the environment strive to use only natural ingredients in the composition of the art, good examples being the work of Richard Long and Andy Goldsworthy. This work however consciously uses artificial material in the form of nylon paracord.

In the work the placing of brightly coloured plastic into the environment refers partly to humanity’s imposition of artificiality onto the natural world. This is partly a message about the despoiling of the environment by our endeavours. The fact that the nylon cord has been simply laid on the boulder (which took the effort of a whole five minutes) helps to reinforce this message, as the cord acquires qualities associated with the detritus of our instant gratification throw-away consumer culture. The fact that the cord is plastic reinforces this further.  However, the brightly coloured plastic actually looks quite pleasing on the rock, so the work is also saying that humanity’s imposition of artificiality onto the environment may have a positive side to it, at least to us (but also that just because something looks nice doesn’t necessarily mean that it is).

In fact, where would we be without the artificiality that we impose on the environment? Hence some of the ambiguity in this piece.

The rock is on low heathland behind my house at Rosemorran, Zennor, Cornwall. 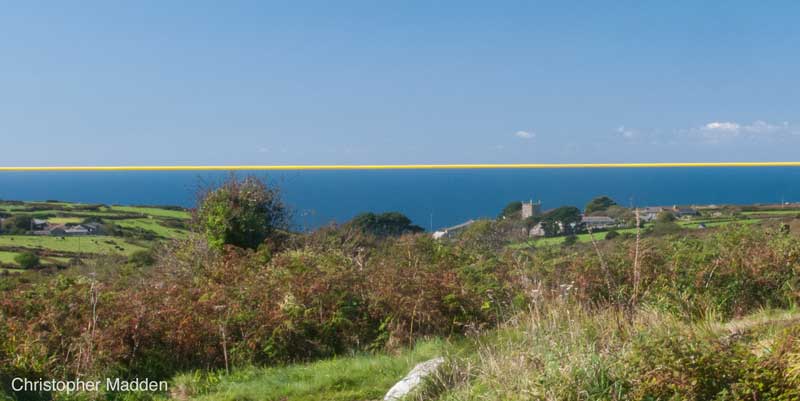 A photograph of a length of brightly coloured plastic cord stretched horizontally so that it coincides exactly with the horizon.
This is an unmanipulated photograph.
The work is partly about the all pervasive presence of plastic in our lives and the environment, with the piece of plastic cord seemingly stretching all the way along the horizon. The fact that the line of the cord is along the horizon created by the sea links the cord with the plastic pollution that is present in vast quantities in the oceans.
As well being a metaphor for the plastic that is polluting the oceans, the cord also signifies that plastic is in many ways a very useful and pleasing substance (without which our modern world wouldn’t be able to function). This is indicated by the fact that the cord creates a very pleasing aesthetic effect. The major problem with plastics is the complex molecular structures that are created during the creation of the plastic – when plastics are developed that don’t have those structures, and that thus decompose properly, the plastic problem will be greatly reduced (although of course it will still be a problem, along with all of the other problems that we are inflicting on the planet).

The work also exists at a purely aesthetic level, with an appeal generated solely through the juxtaposition of the horizon and the cord.

The work was created at my home at Lower Rosemorran, Zennor, Cornwall. 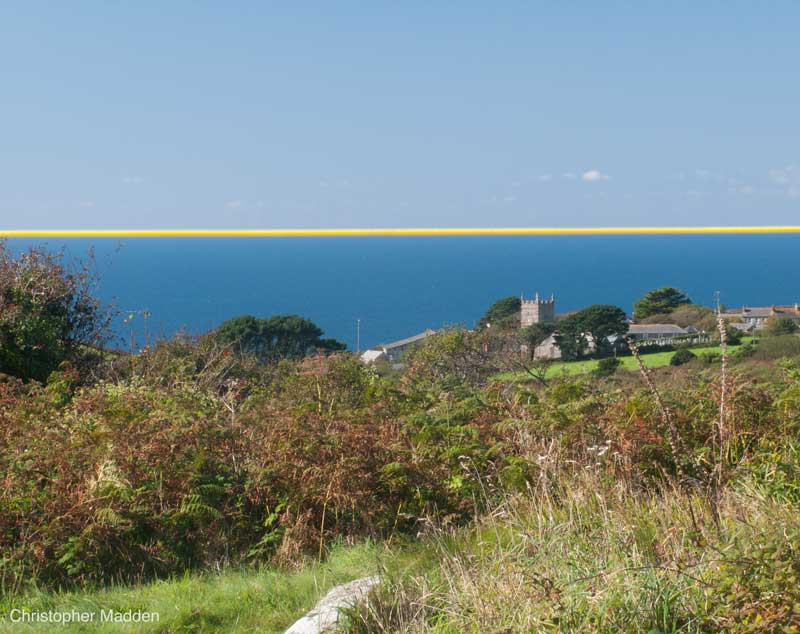 A detail of the photograph to show the church.