This work is a relatively slow moving animation that repays close attention. At first you may think that the animation isn’t working, but after three or four seconds you will notice the changes that are occurring to the complex inner structure of the work.
It is composed of overlapping identical grids of hexagons rotating relative to each other.
Simple algorithms make the black and white areas on the grids interact with each other so that, for instance, where black areas overlap they turn white.
The work is deliberately slow to give it a meditative quality. Other works in the same series are faster and give a more dynamic effect.

A work from my series of animations depicting radiating forms expanding outwards from a central point of emergence. The work is linked to my interest in the process of creation on a cosmic scale, such as the creation of the universe at the Big Bang or the expansion of a star or other celestial object.
The work is ideally viewed on a large screen.
This work was exhibited in the London Group gallery, Waterloo, London in December 2019 and the Penwith Gallery, St Ives Cornwall in February 2020. 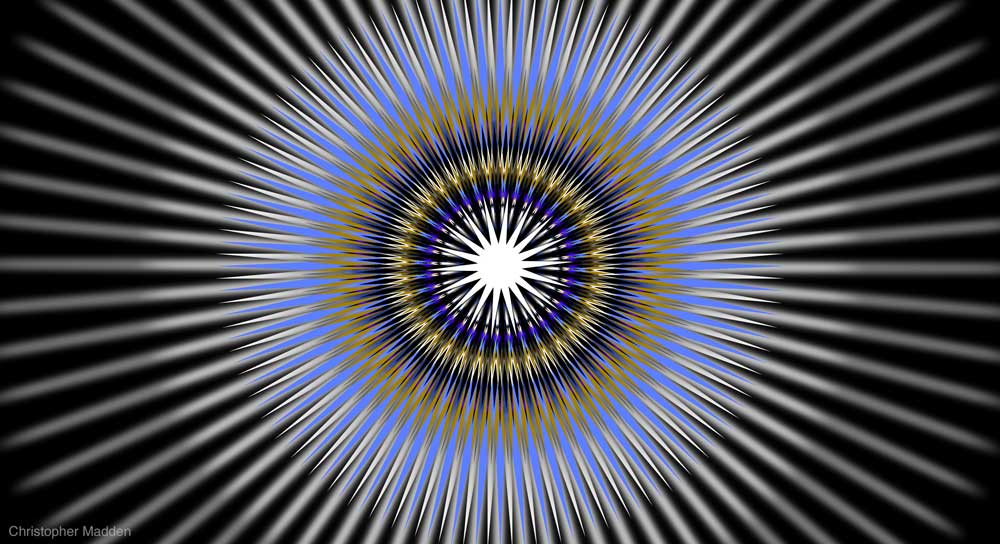 A still image from an animated work showing a starburst effect.
The image was used in the Deep Space event on 21st April 2018 at Sterts Theatre near Liskeard in Cornwall.

A piece of abstract digital animation that uses my technique of overlaying multiple copies of the same image made to move relative to each other in simple ways and to interact with each other so that, for instance, the colour displayed in the resulting image changes.
This “starburst” animation is composed of multiple overlaid copied of a 36 pointed star.
A key motive behind these video animations is the linking of art and science through the exploration of the creation of complex forms from the interaction of simple forms, with particular reference to the creation of the incredible complexity of the universe from its incredibly simple building blocks. There’s more about this here: Complexity from simplicity: contemporary artworks.

A detail from an abstract moving image work from a series in which multiple copies of a single shape move and interact using simple computer algorithms, creating complex shapes.
In this work multiple versions of a simple star shape are modified in size and colour to create a complex star form. Smaller clones of this star form are then ejected from the original star form, in an action that suggests the birth of new stars or the creation of matter in some other dimension of the universe.

An abstract moving image work from a series in which multiple copies of a single shape (usually a relatively simple geometrical form) move, overlap and interact using simple computer algorithms to create complex shapes.
This work was exhibited in the London Group Open, 2017.

An abstract moving image work from a series in which multiple copies of a single shape move and interact using simple computer algorithms, creating complex shapes.
In this work forty-eight disks move a circle creating strikingly different patterns and effects in the first and second halves of the work.

I was interested to see during a shopping trip into London today that the current ‘branding animation’ that is running on all of the Apple computers on show in a department store that I visited had something of the look and feel of some of my own animations (shown below).
This is probably a coincidence. I can’t imagine that the designers in Apple’s branding department were trawling the internet and happened to come across my work. And then chose to adopt some of its style. Although you never know. They have to keep their fingers on the pulse after all – although I’m not sure how on the pulse my videos are, as the video that the Apple animation most resembles is several years now.
The Apple animation, which I can’t find on the internet, and therefore can’t point you towards, features the leaf on the Apple logo detaching itself and replicating itself to form a rotating circle composed of multiple copies of itself, changing size and colour but always retaining a degree of graphic simplicity.
The animation sequence to me had something of the feel of of mine. Of course it may only be me who sees any resemblance, due to my heightened sensitivity towards the design factors of the work I created. My work uses circles rather than leaf-shaped lozenges, my circles interact where they overlay while Apple’s simply overlay, and mine are different colours, but that’s not much of a difference in my book.
Assuming that there IS a resemblance of some sort I’m not sure whether to be pleased that a company of Apple’s status is using a similar style to mine, and thus validating it, or be annoyed that a company of Apple’s status is using a similar style to mine, as people would inevitably say “Your animation’s inspired by Apple’s, isn’t it?”.

A longer version of this animation, with more variation in the movement, can be seen here: Animation

The image above is an example of work from a series that I created specifically to explore concepts from the worlds of science and philosophy.
The original motivation behind the work was a wish to devise a visual means of expressing the concept that our incredibly complex universe is generated from the interaction of extremely simple fundamental forces that underlie the cosmos.

The image explores the generation of complex forms from simple forms. The image is composed of two identical grids of regularly spaced small circles, with one of the grids positioned one above the other and rotated so that the arrangement of circles on the two grids are at different angles to each other, meaning that they overlap.

A simple algorithm is applied to the overlapping grids that dictates that where the black areas of the circles overlap the blacks cancel each other out, effectively leaving white.  See the two examples below, showing differing amounts of overlap.

The two simple overlapping grids of circles generate surprisingly complex patterns, forming multiple and various interacting rings, some of which are obvious while others are fugitive and seem to come in and out of existence as your eye scans the image.

The square grid in the image  is a metaphor for the deepest, most fundamental and basic level of the physical universe, where nothing exists other than the simplest of all possible fluctuations in ‘nothingness’ itself (represented by the uniform circles).

Complexity and structure come into existence when this  basic level of the physical universe – the grid of circles – interacts with itself, creating intricate forms that contain a new and complex internal structure. It is this complex internal structure that then gives rise to even more complex structures within the universe,  for instance giving form to the elementary particles that act as the building blocks of the universe that we’re familiar with (while also giving form to the parts of the universe that we’ve got no inkling about, too) .

I like to think of the patterns in the images as metaphors for ripples in the fabric of reality.

There are several more examples of my work in this field, including more videos of rotating grids here.

The videos show the shifting and transient nature of the complex patterns very well, expressing, I like to think, the way that structure in physical reality “pops” in and out of existence. 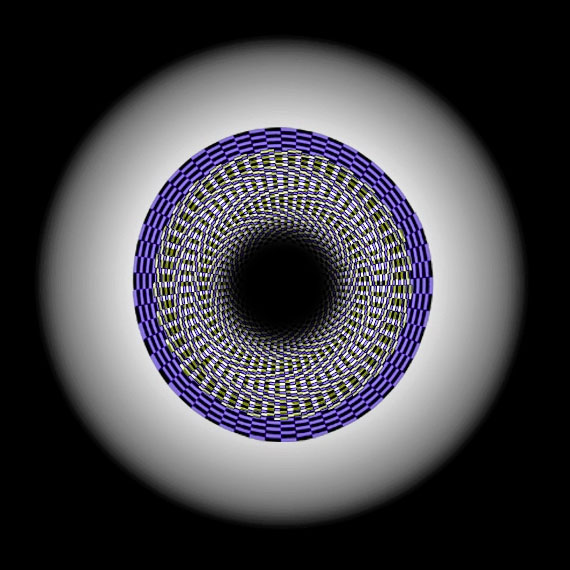 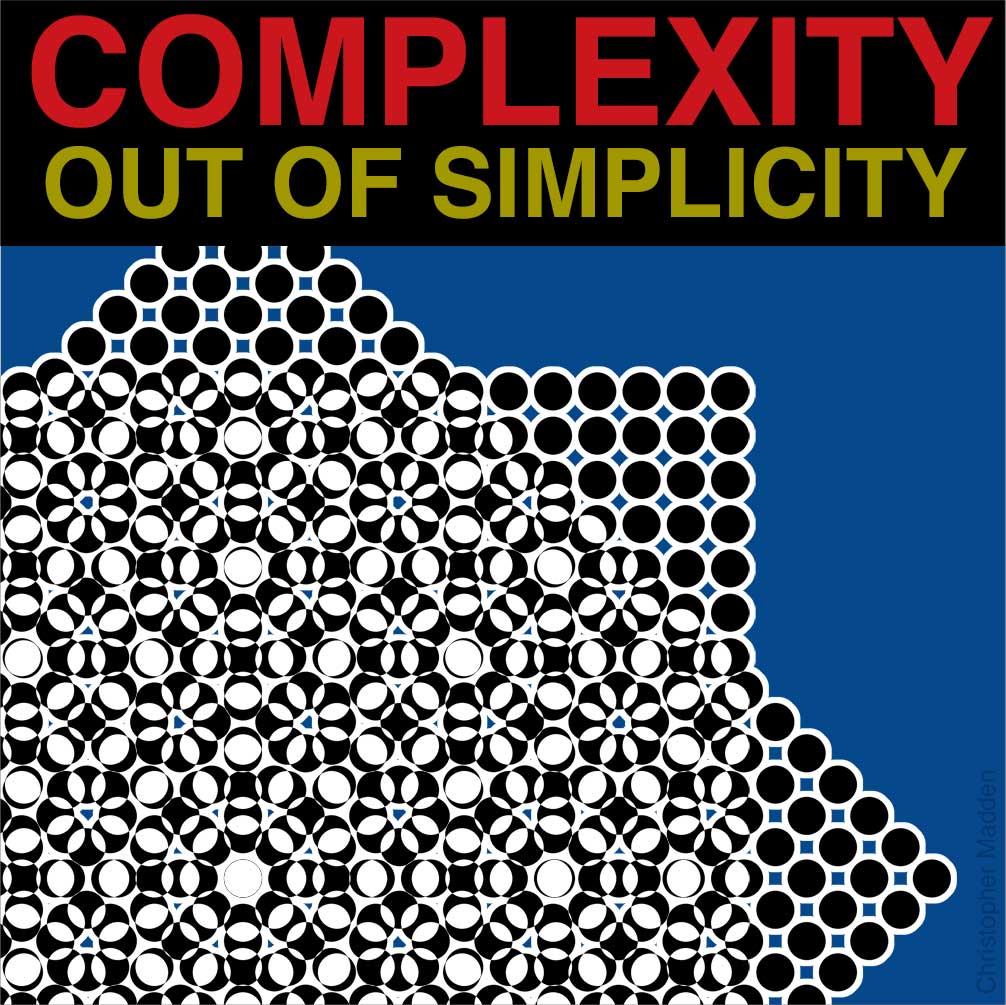