This work is a relatively slow moving animation that repays close attention. At first you may think that the animation isn’t working, but after three or four seconds you will notice the changes that are occurring to the complex inner structure of the work.
It is composed of overlapping identical grids of hexagons rotating relative to each other.
Simple algorithms make the black and white areas on the grids interact with each other so that, for instance, where black areas overlap they turn white.
The work is deliberately slow to give it a meditative quality. Other works in the same series are faster and give a more dynamic effect. 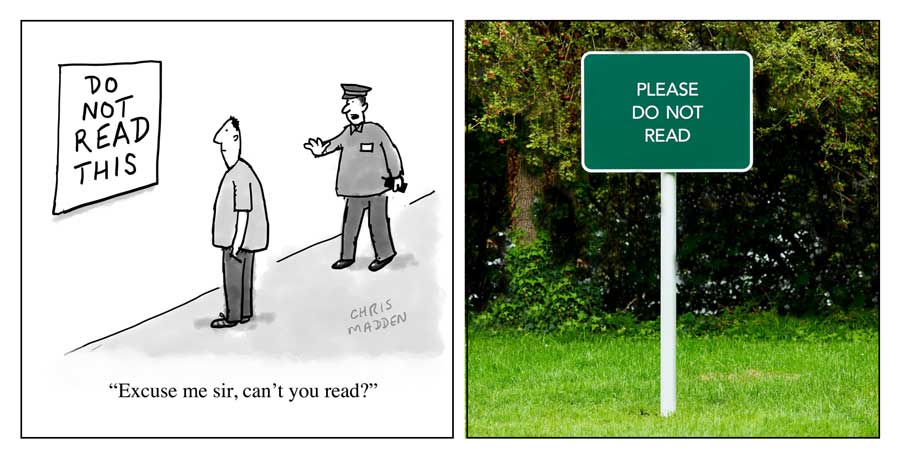 Two manifestations of the same concept by different artists.

An example of different artists thinking of the same idea independently.
The cartoon drawing is a joke about text-based art from a series of cartoons that I drew on the subject of contemporary art in 2019.
The photograph is of a sculptural text-based work by Harrison & Wood at Frieze London, 2022. 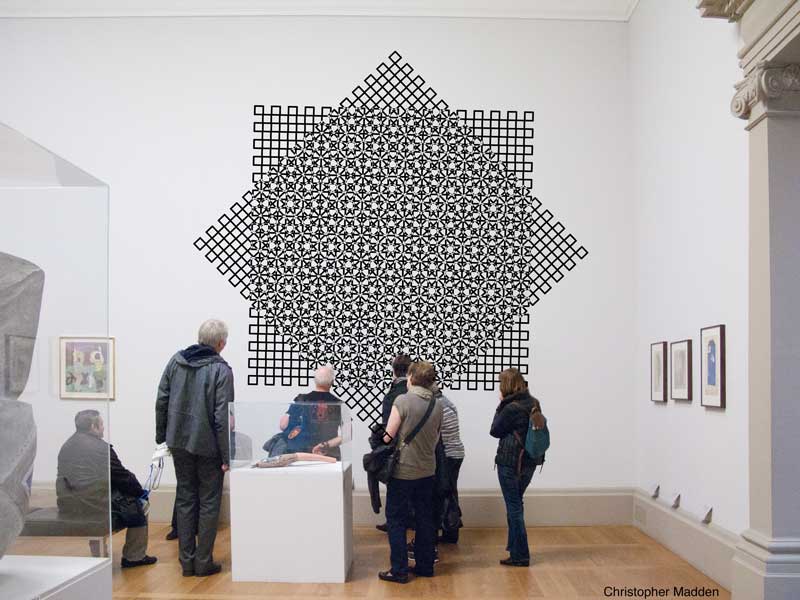 An artist’s impression of one of my Emergent Pattern artworks as it would appear displayed on an art gallery wall.
The work is composed of two grids of black lines that are one above the other and that are at an angle to each other. Where the lines on the two grids cross each other the black lines cancel out and are replaced by white. The effect is that the overlapping grids create complex emergent patterns similar to Moire fringes or interference patterns (Patterns are created without the need to cancel out the black areas where the lines cross, but the patterns are more complex and interesting using this technique).

A light source shining on painted and folded card cut-outs in the form of rings.
The shadows cast by the light form half of each ring on the base.
The image above shows the light turning on and off to show the effect.
An example of contemporary light sculpture. 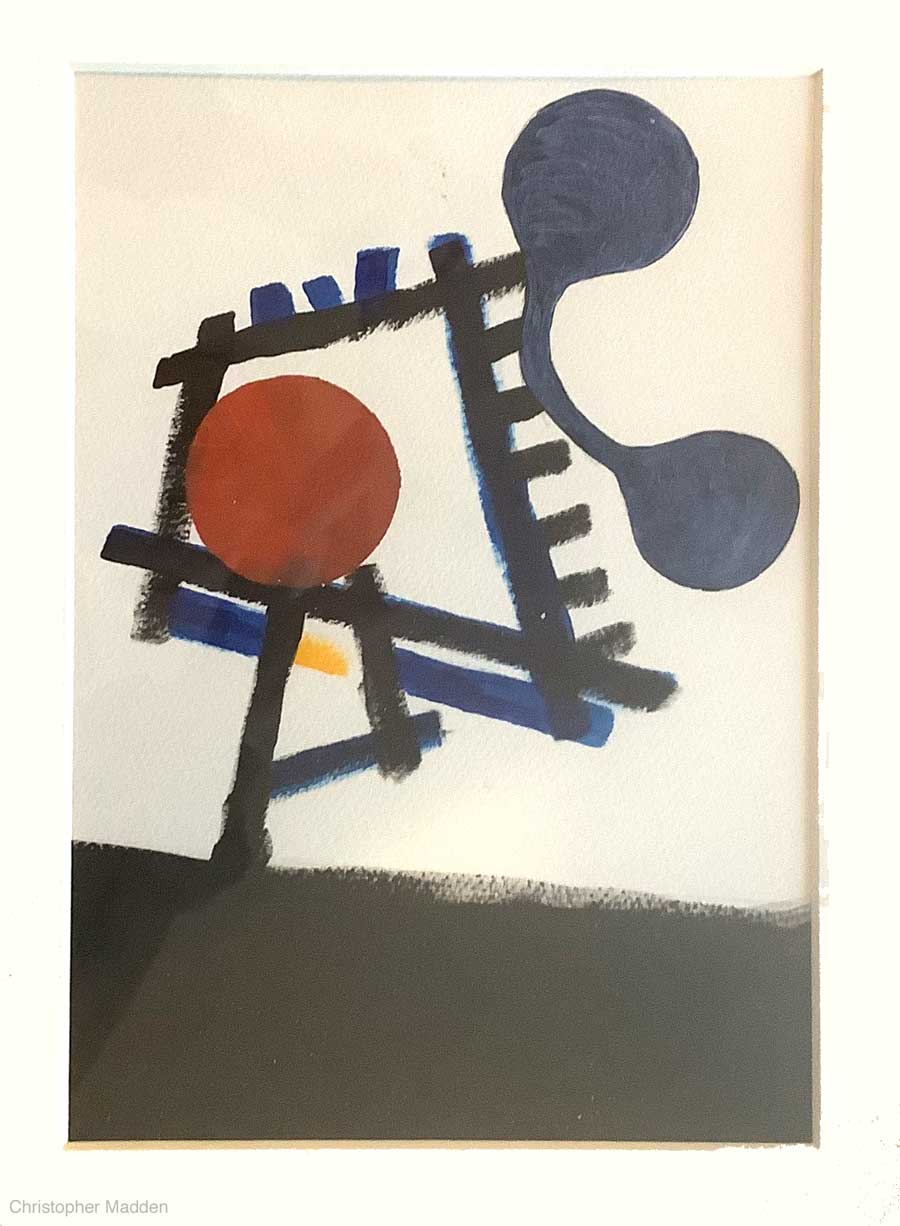 An abstract painting composed of black lines and areas of colour.
The framework of black acrylic lines was painted first, quite quickly and spontaneously. The coloured areas were added to this superstructure later after experimenting with their positions. 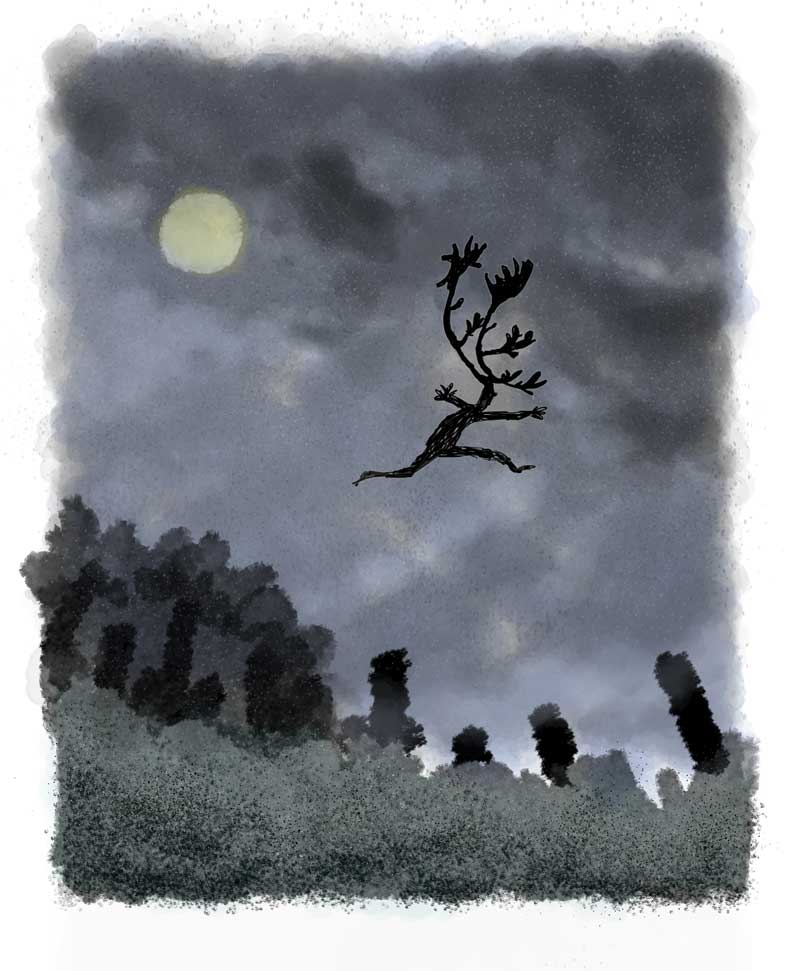 A sketch of a leaping figure with antlers.
I’ve drawn several images featuring men who have antlers growing from their heads (They’re not stuck on). They are something to do with alpha males, or males who posture as alpha males. 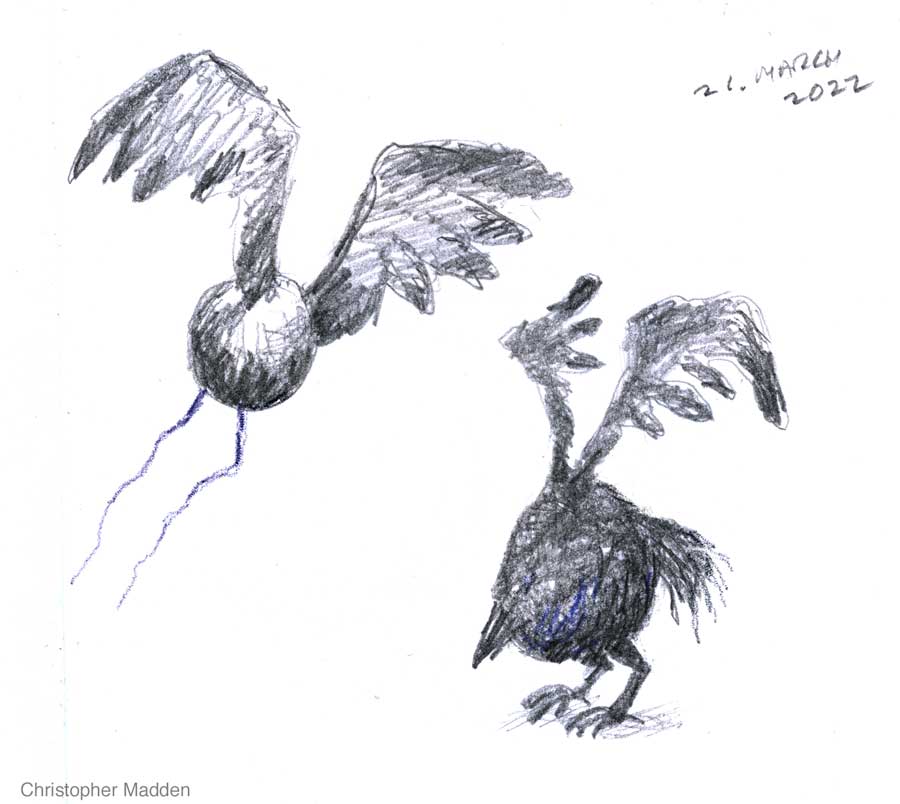 Imaginary creatures consisting of spheres with anatomical features such as wings or legs recur in my work. I like the way that a sphere can be both a head and a body at the same time.
This is a sketch from the imagination (obviously), drawn during a spare moment over a coffee in a cafe. 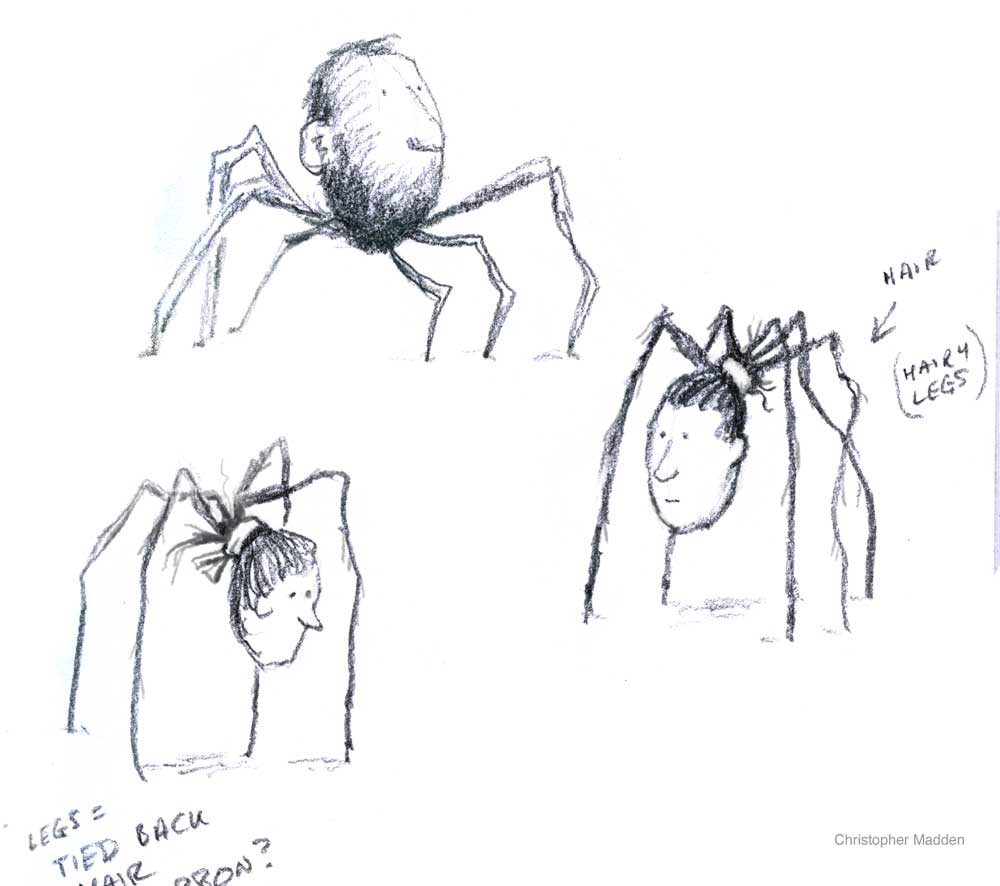 I frequently draw heads in unusual situations. On two of these ‘spider heads’ I’ve turned the hair on the heads into long spider legs, with the heads forming the anatomically incorrect spiders’ bodies.
I think the spider legs in these sketches owe something to the spiders of Louise Bourgeois.
Like many of my sketches these were drawn over a cup of coffee in a cafe. 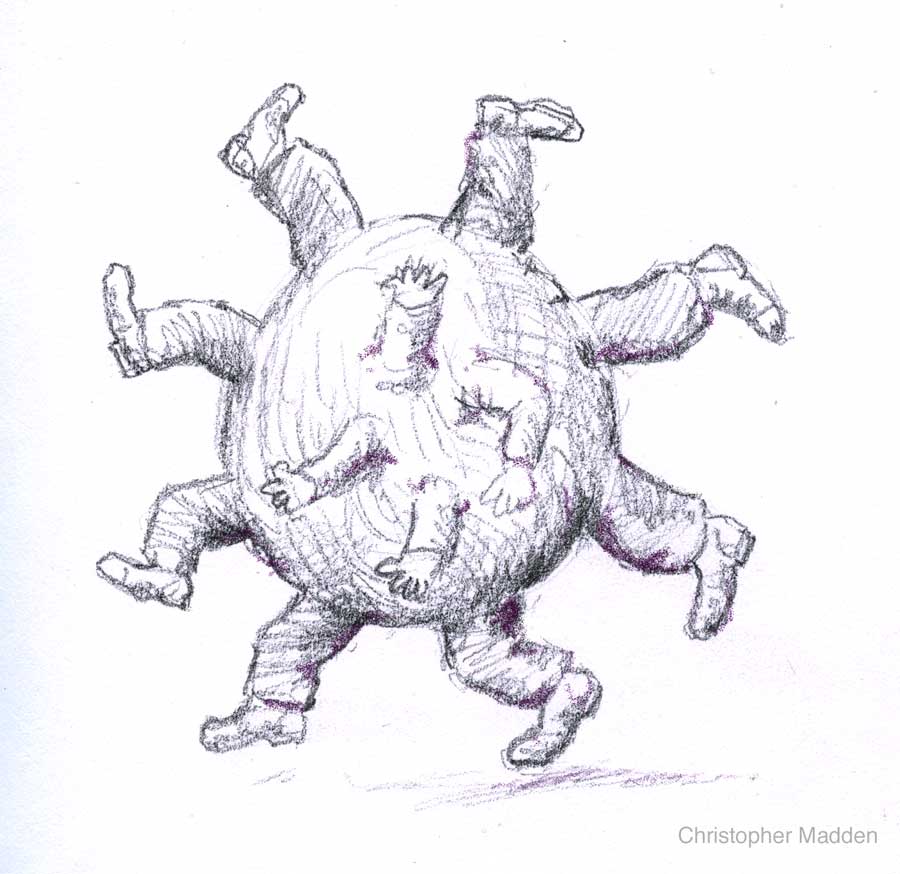 I often carry a sketch book with me in case I have a free moment when inspiration strikes. I drew this in a cafe over a cup of coffee.
It incorporates several motifs that recur in my work (spheres and arms and legs). 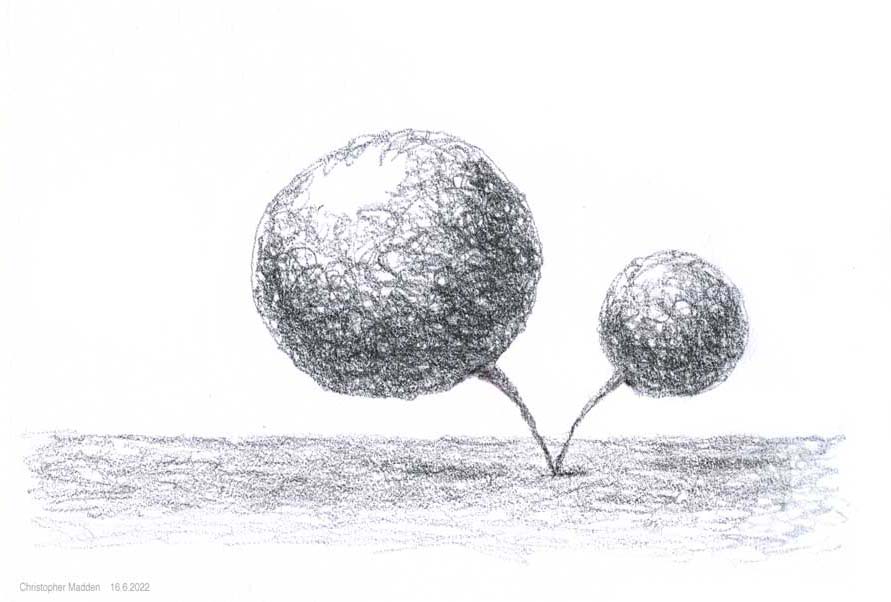 I frequently draw sketches from my imagination with little or no preconceived idea about what I’m going to draw. This is one of them. 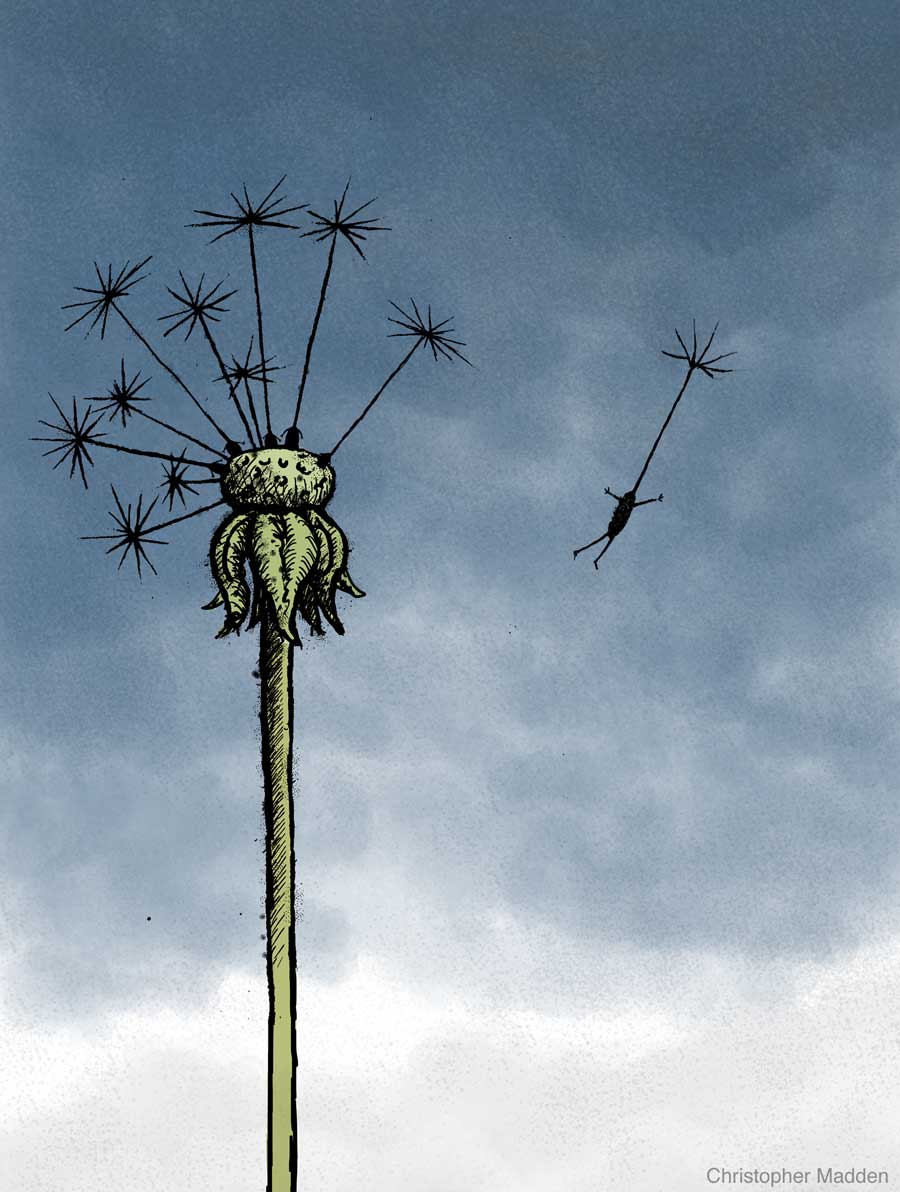 The seed of a dandelion, a figure in flight. 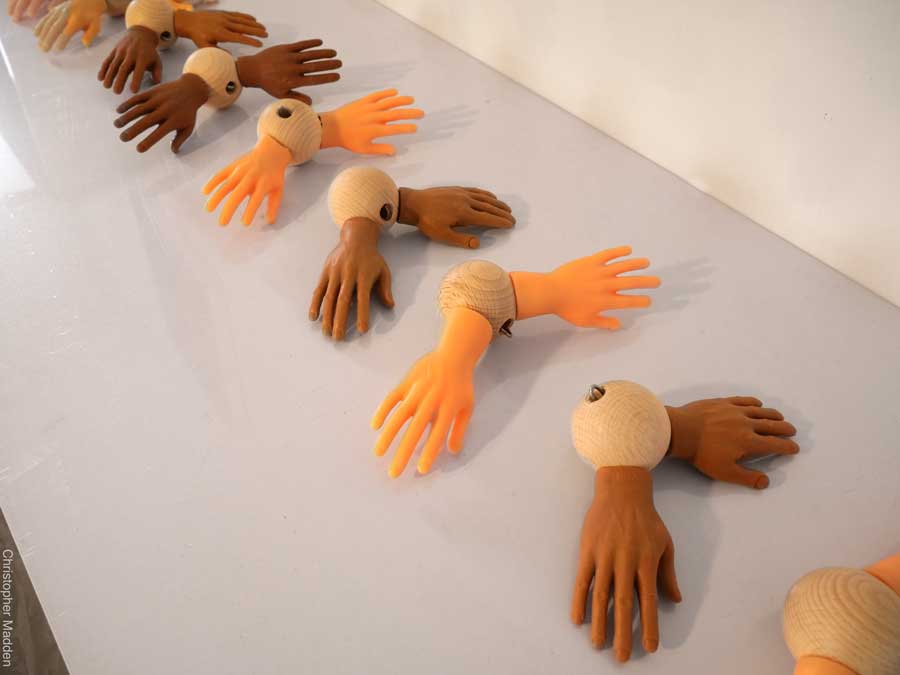 A sculptural piece consisting of toy plastic hands (finger hands) attached to wooden spheres.
The hands are almost the only anatomical feature possessed by the spheres. This makes their function ambiguous – are they actually hands, or are they feet or even wings?
The ‘creatures’ in the procession are quite unsettling. Their lack of anatomical features other than hands gives them the impression that they are crawling clumsily and blindly forward.
Other artworks in this series feature these objects suspended by thread on a mobile. In these works the hands are unmistakably also wings. In the natural world the wings of birds and bats have evolved from hands (or front feet, which are what hands have evolved from), so the idea of hands being used as wings is far from far-fetched.
This work shows my interest in evolutionary science and the natural world. The Oppressor Impaled by the Oppressed. This version, May 2022. Hammer, nails.

A sculptural piece consisting of a hammer nailed to a surface.
Part of the concept behind the work is that the hammer is being empaled by the objects that it normally hits.
This is partly a metaphor for oppression and rebellion, and it’s also a study in irony.
How did the hammer become impaled by the nails? Were the nails hammered into the hammer by another hammer? In that case the nails are not necessarily the downtrodden oppressed rising up to overthrow their oppressor using their own power, but are more like the followers of another power (another hammer) that may turn out to be as oppressive as the hammer that’s been overthrown.
The use of handyman’s tools such as hammers, pliers and spanners is a recurring feature of my artwork. 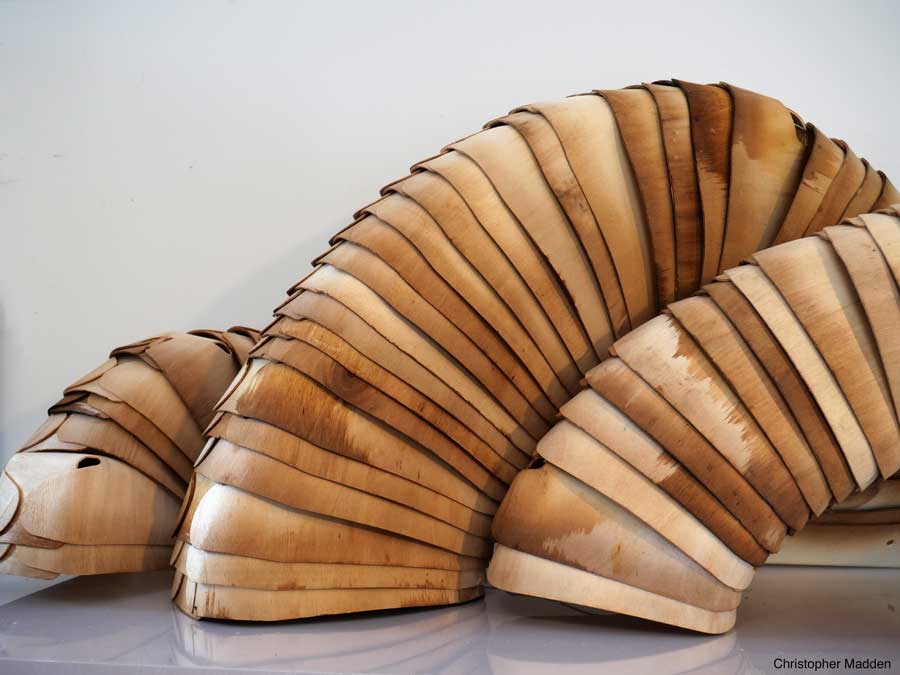 This work reflects my interest in the natural world and the environment, as well as my concerns for environmental issues caused by human activity (this being an example of upcycling of consumer waste). 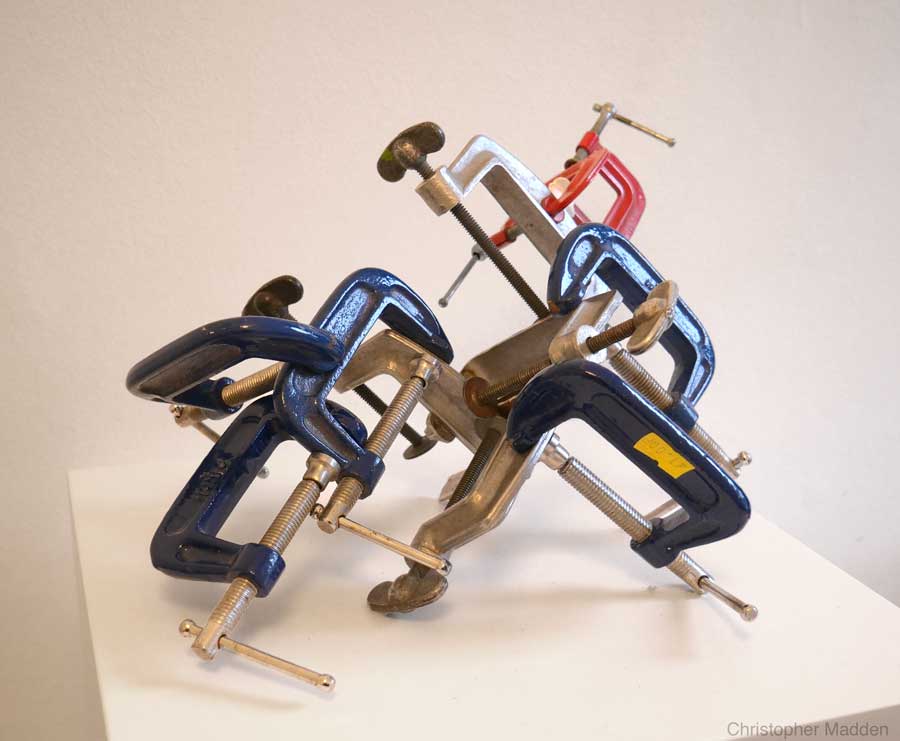 A sculpture composed of G clamps.
G clamps are usually used for holding work together temporarily, such as when components are being glued together. Here the G clamps are holding on to each other so that they are part of a structure rather than an instrument for creating a structure. The angle of the piece gives the structure a feeling of instability. This could have allusions to the instability of the modern world that we have constructed through our use of industry and technology, where the very means by which we have constructed our world leads to its inherent precariousness, especially now that we are inflicting such serious environmental damage. 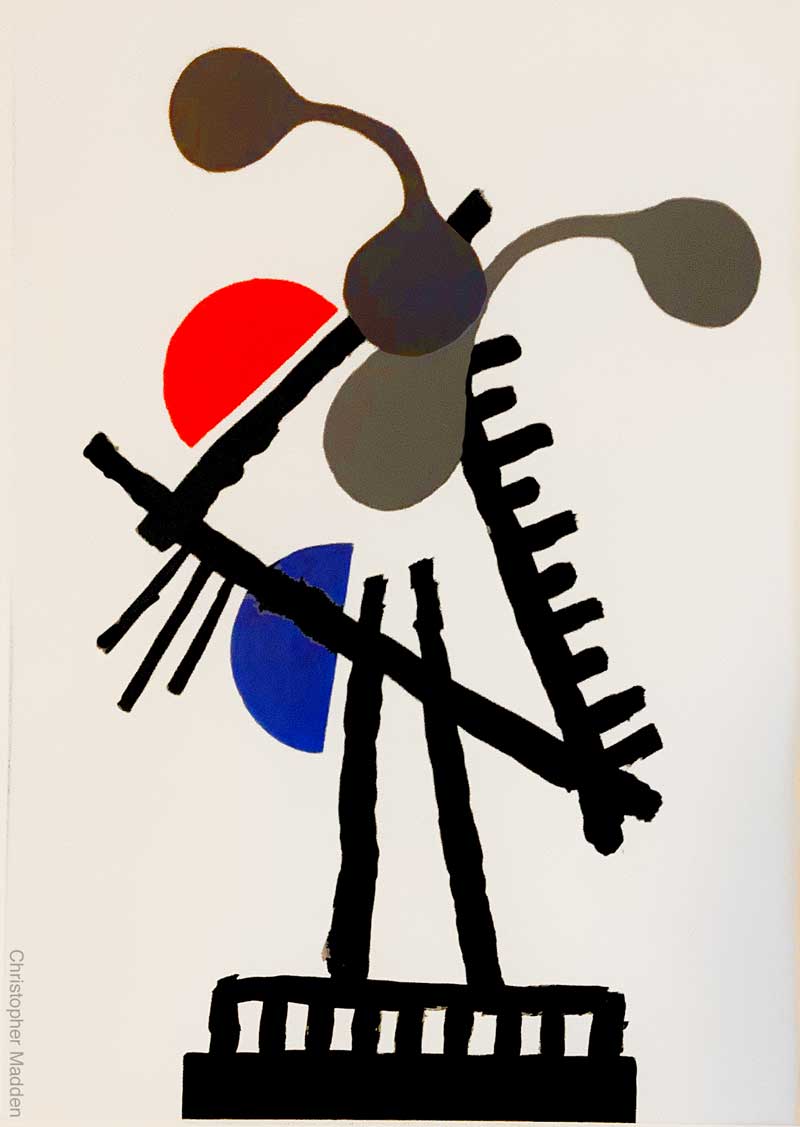 A work from a series of abstract acrylic painting featuring strongly linear black forms interacting with curving coloured forms.
Although the black linear elements are abstract their composition give the impression of a living entity such as an animal or a person – an effect that is heightened by the coloured curving forms, some of which hint at anatomical features.

A sculpture fabricated from polystyrene packaging – an example of upcycled art.

Upcycling, or the repurposing of waste or redundant material, is a common phenomenon in art, especially recently since the rise of environmentally orientated art or eco art (and the invention of the word upcycling).
Of course the practice is probably as old as art itself.
I’m sure I’m not the first to notice the sculptural qualities of pieces of polystyrene packaging. 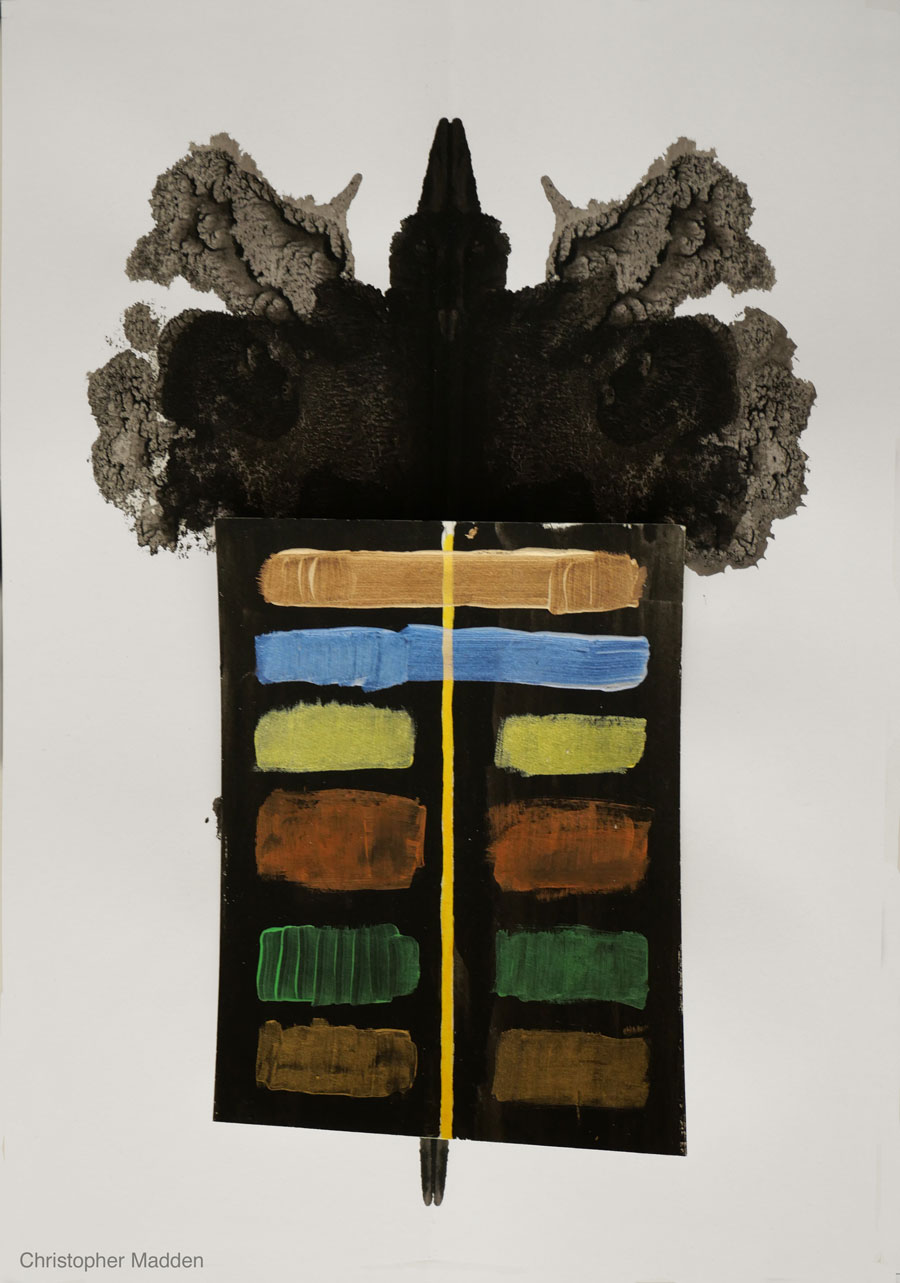 A watercolour Rorschach pattern, or inkblot test pattern, with a panel of stripes in acrylic collaged onto it, giving the impression of a mask.
Below, the image framed. 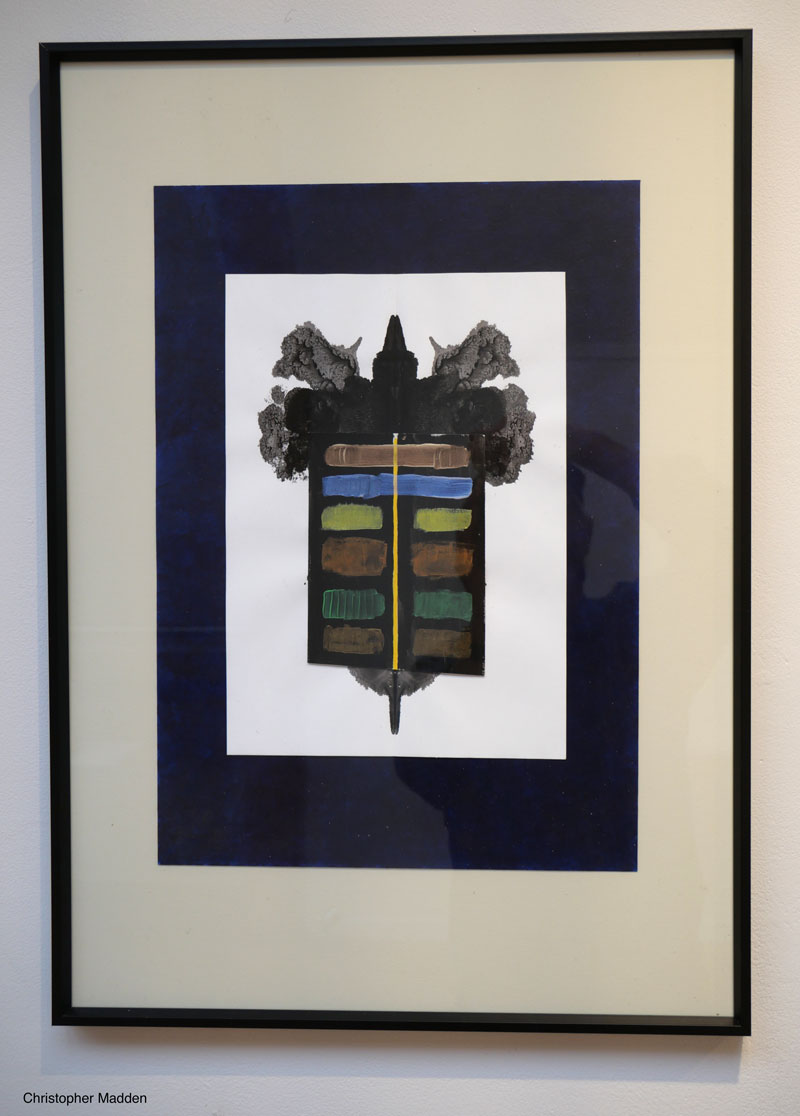 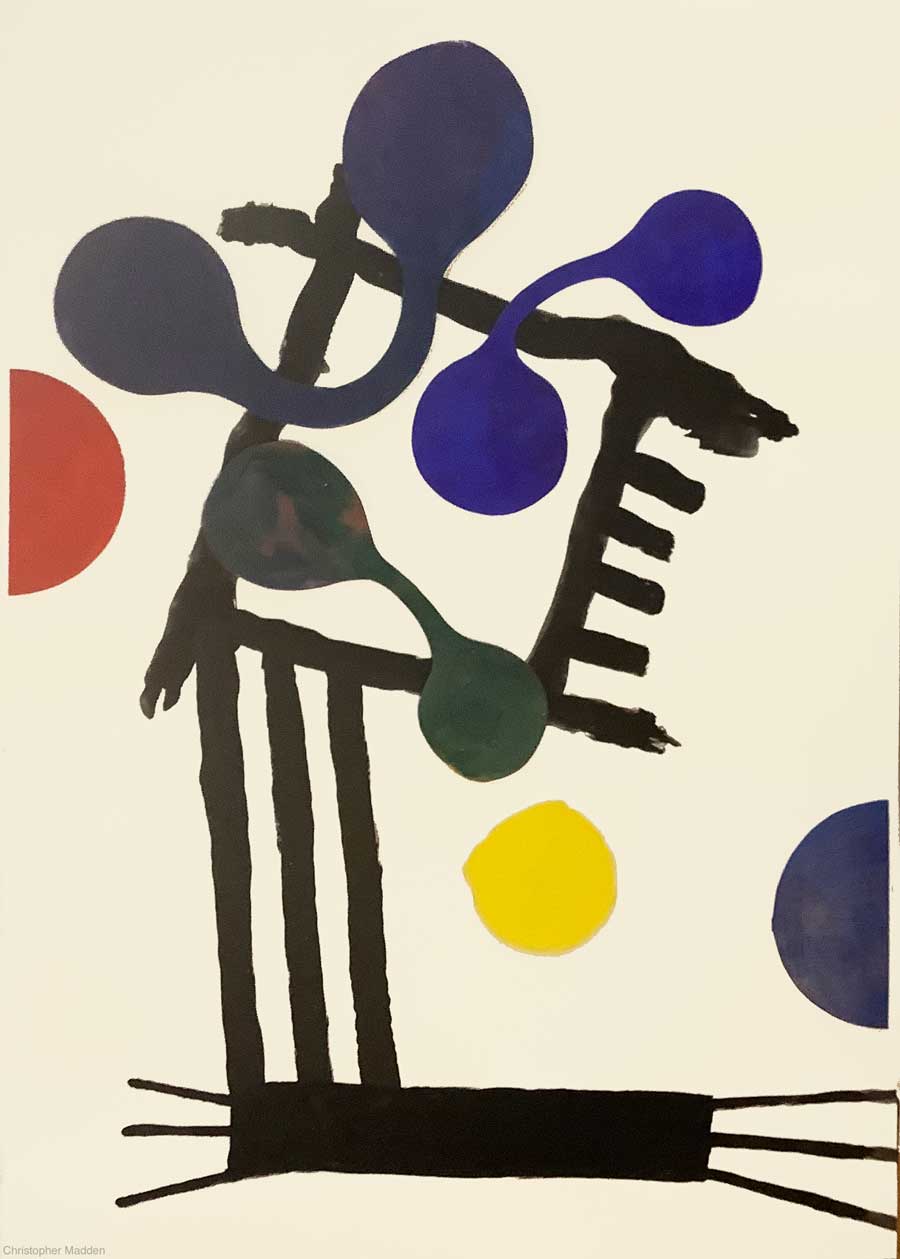 An abstract acrylic painting featuring a strongly linear black form overlaid by curving coloured forms (some of which are collage while others are painted directly onto the paper).
Although the black linear elements are abstract they convey the impression of a dynamic animal form. This is heightened by the coloured curving forms, some of which hint at eyes or of other organic entities. 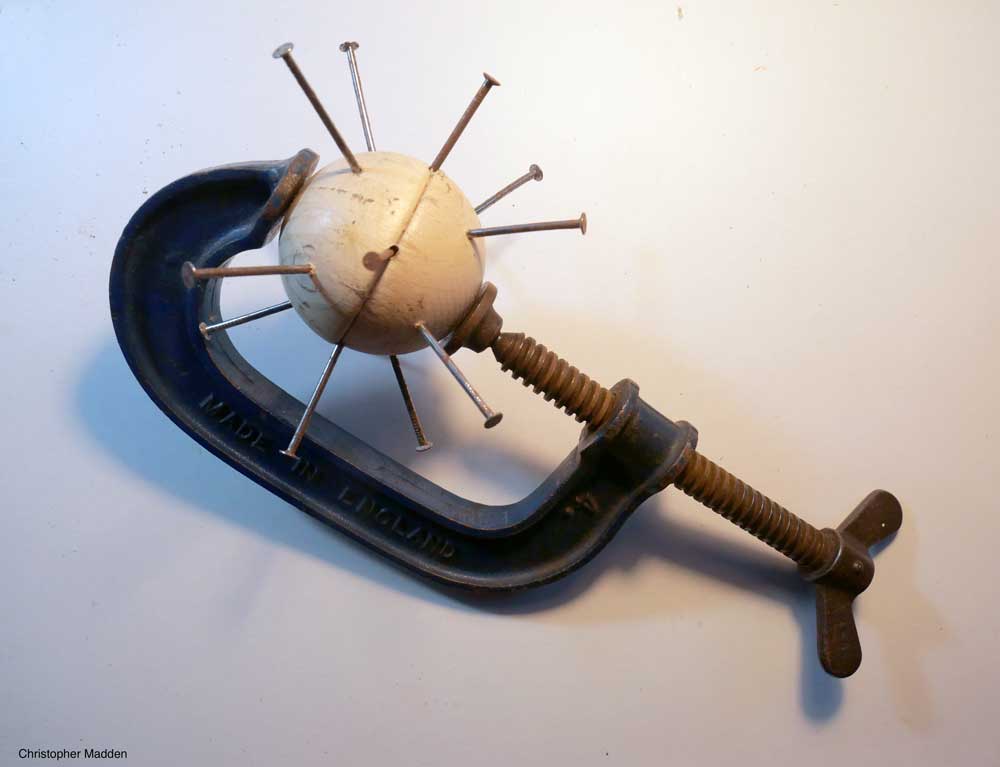 This is almost an accidental artwork.
The nails in the sphere are there to attach other objects to. The G clamp is there to hold the sphere together (It’s actually two hemispheres glued together).